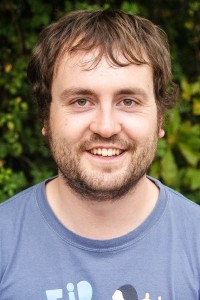 Kevin is a London based Director, originally from Southampton. He stumbled across composers Amies & Clements back in 2014, and falling instantly in love with their work, wanted to help them get it off the ground. He commissioned Amies & Clements to write a concert of original songs for a Southampton based company to work on, and got a lot more than he asked for as Tomorrow, Maybe was born.

Kevin has been an integral part of Tomorrow, Maybe from the very early songs, right through to the first public appearance of the show. He worked closely with the composers through the show’s original workshop in December 2014, before directing a full production, which was performed in Romsey, Southampton in May 2015. Kevin continued to envision a life for the show beyond the quaint walls of Romsey so decided to set up Aardvarks Can’t Jump Productions to help take the show through to its professional debut. Kevin hopes that in the future ACJ Productions can provide a platform for other new writers who are looking for a company to help develop their work.

Alongside his work as Director, Kevin is a drummer and has worked with several bands and artists around the UK and Europe.  He was delighted to help create some of the percussion parts in the early productions of Tomorrow, Maybe.